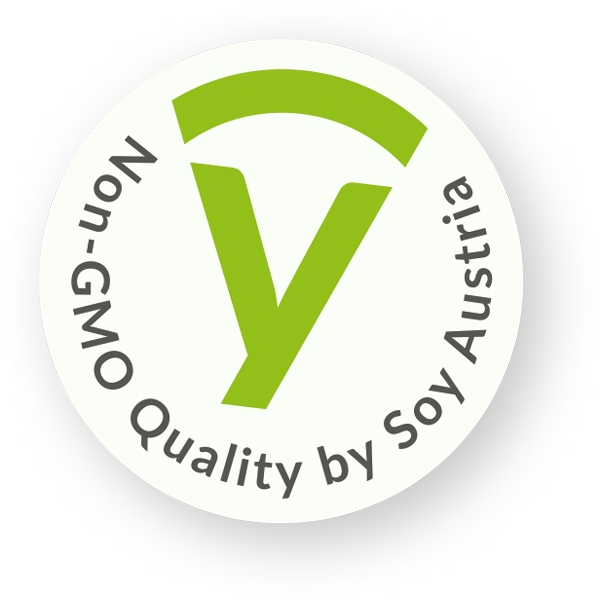 “Expertise is the combination of competence and experience. We add to our ‘knowledge history’ with the ongoing innovation of our processes and products. Our constant interest in creating something new generates important added value for our customers.”

SOY AUSTRIA AT A GLANCE

We are producer of natural, non-GMO soy-based ingredients for the global food industry. 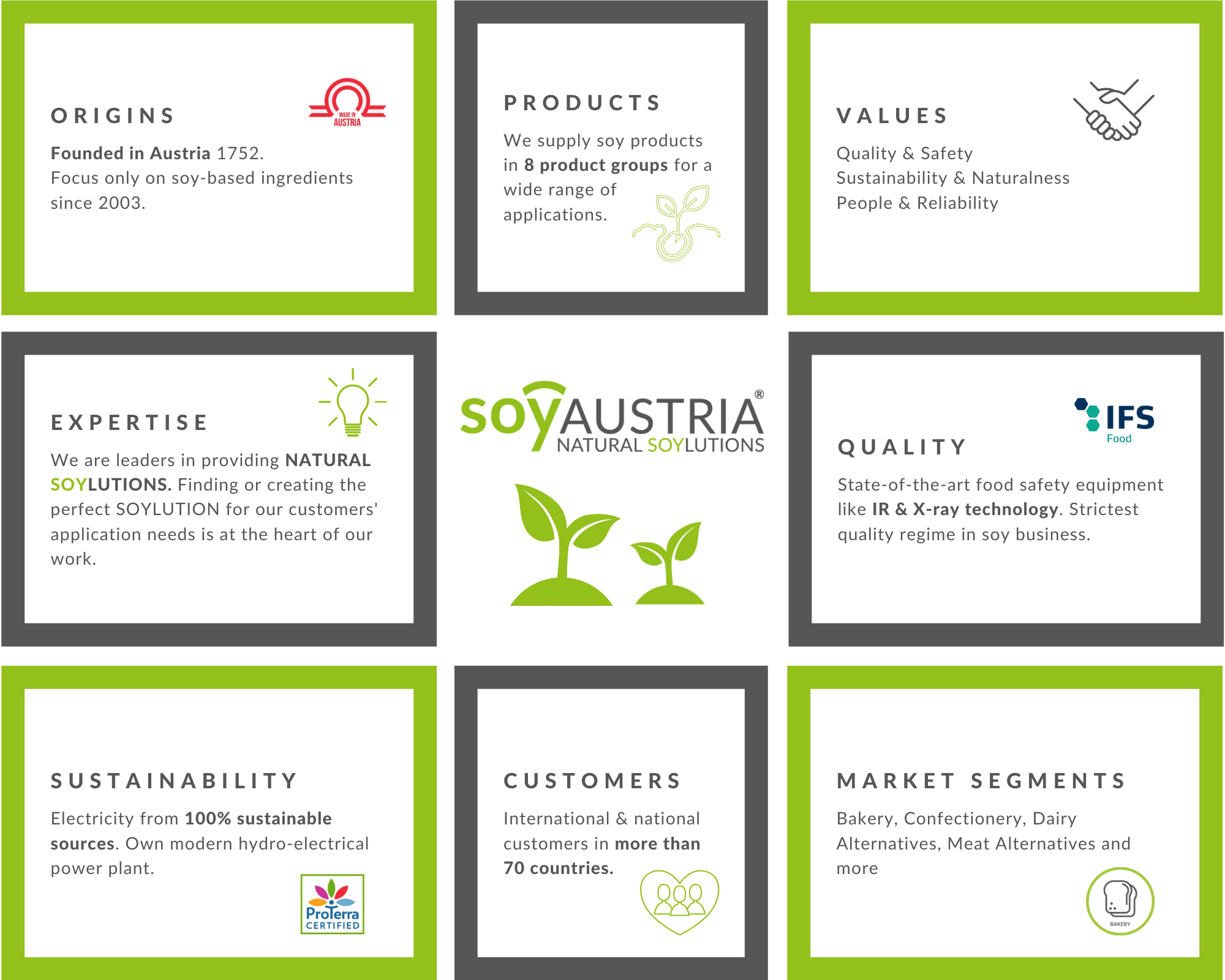 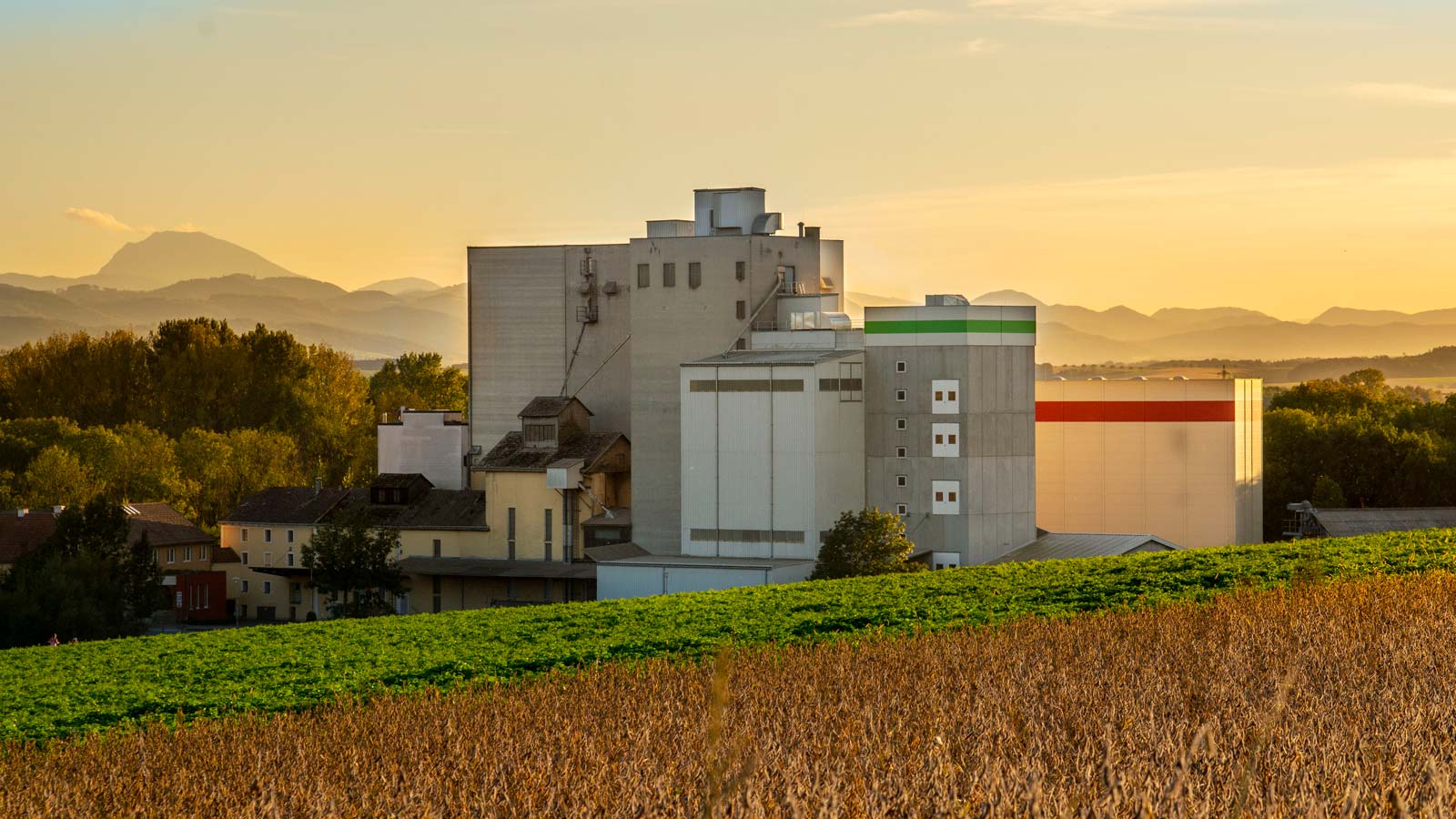 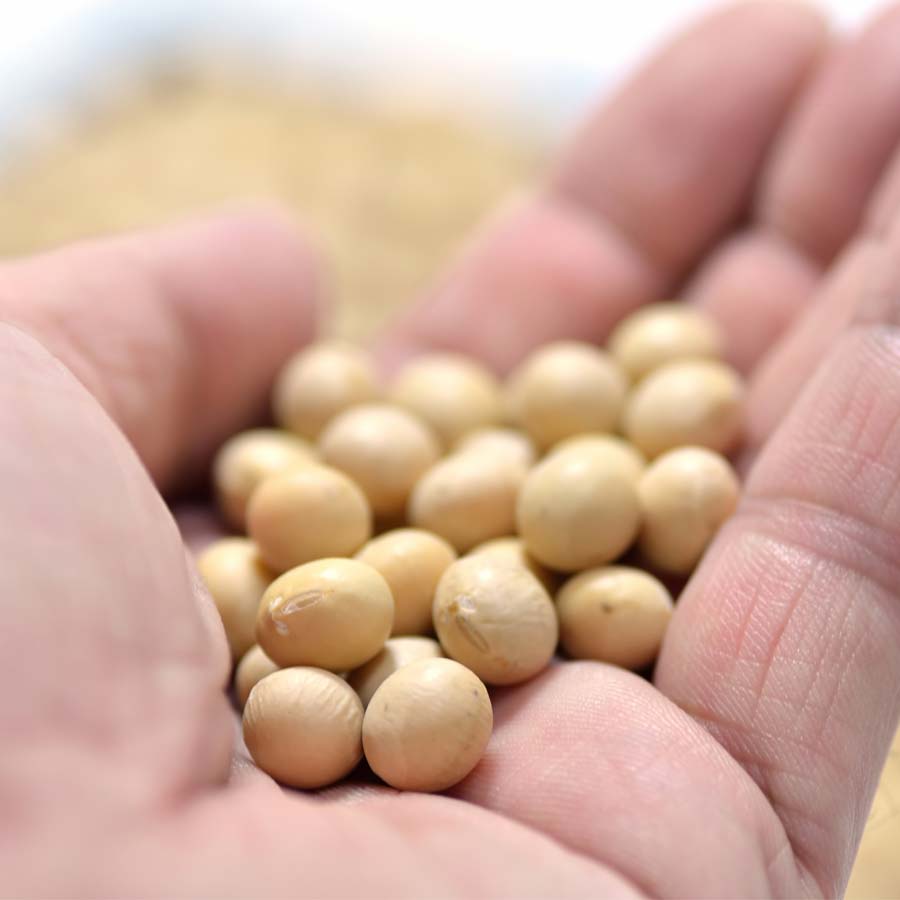 Our company produces sustainable soy-based GMO-free ingredients for the global food industry. In production, we apply quality criteria that meet the highest standards and only use European soybeans. We pride ourselves on creating ingredients whose high-grade constituents and added value remain unchanged. What began as a mill has grown to become an international group of companies. Our business-oriented thinking is characterised by innovative drive – and that’s what motivates us. This enables us to meet future challenges and proactively exploit them. Alongside product quality, outstanding customer service and excellent relations with customers, suppliers and employees are of paramount importance to us.

“Reliability, quality and trust are the hallmarks of our daily work for our customers.”

Innovation that grows from tradition

Products for human consumption have been manufactured at our company site in Prinzersdorf for over 250 years. In the 1980s, cultivation of soy was revived in Austria after a break of 70 years.

This development was seen as an opportunity to create GMO-free soy products of outstanding quality for customers in the food processing industry. The ideas were put into practice when the first factory for full-fat soy products was built in 1989. The decisive steps towards export and internationalisation were taken with the foundation of Soja Austria in 1995. In 2017, second factory was built for the production of defatted soy flour and soy texturates. Over time, the flour mill and feed plant was transformed into a group of companies specialising solely in GMO-free soy products – today’s Soy Austria® Group. Reliability and quality awareness have always been core values of ours, and are part and parcel of our corporate culture. Our employees and partners appreciate this.

Constant monitoring of the market and understanding our customers’ needs is a vital aspect of our daily activities. With our network of laboratories and university institutions we develop innovative ideas, turning them into the SOY AUSTRIA® NATURAL SOYLUTIONS.

Soy Austria® is a trusted partner and supplier of the food industry in Austria and the global markets, always with the aim of reliably providing customers with the most suitable and best products.

The mill was founded

Generation change, as Josef Bamberger and Georg Bamberger took over

SOJA AUSTRIA was founded as the commercial entity and introduced as an international brand.

Until the end of 2020 using 65% hydropower including our own hydropower station as our source of electricity. Early January: committing to use 100% sustainable energy in our goal to become CO2 neutral and offer our customers ingredients that are natural and produced as sustainably as possible.

Subscribe to our newsletter and receive the latest infos from Soy Austria!

You are welcome to entrust us with your email address for our free newsletter.

You successfully subscribed to our newsletter! You will get an email shortly with the confirmation of your subscription (double-opt-in-process). Please click on the button in your email.

Our responsible handling of your data:

If you no longer wish to receive the newsletter, you can unsubscribe with one click at any time.